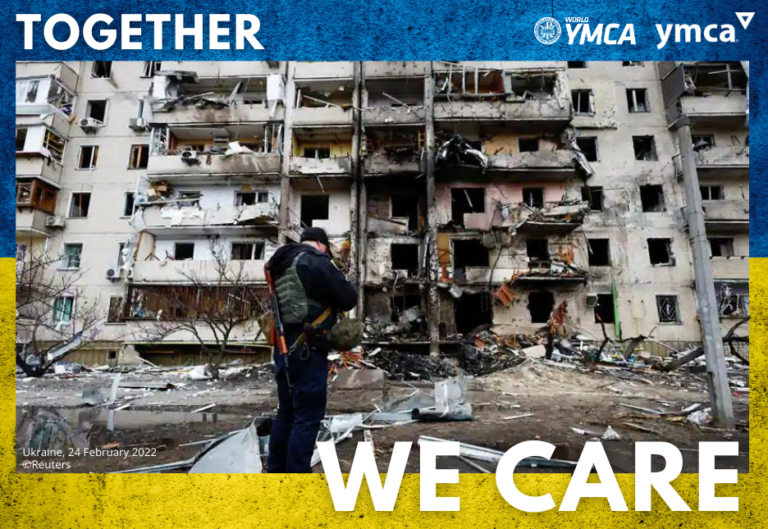 The YMCA of Japan recognizes its historical responsibility in World War II and pledges in the “YMCA of Japan Basic Principles” to work together with the people of the world to achieve peace.
With regard to the recent invasion of Ukraine by Russia, we strongly oppose military aggression and hope that war will not be the solution to international disagreements, but that a diplomatic solution through dialogue and cooperation will be found and that the armed conflict will end as soon as possible.

War destroys in an instant the cities where people live their daily lives, soldiers of both countries take each other’s lives, and many citizens, including children in Ukraine, are deprived of their human rights and dignity of life. If the war continues, more blood will be spilled and more innocent lives will be taken.
Their families, friends, acquaintances, and our tears of grief multiply tens of thousands of times. Our thoughts are with the people of Ukraine, who are in a state of fear and anxiety at this moment.

The YMCA of Ukraine has been working for young people suffering from war since World War I. Since then, under the control of the Communist Party, the YMCA has been working behind the scenes to support young people and children suffering from ethnic conflict and poverty in 25 locations throughout Ukraine. Both the YMCA of Ukraine and the YMCA of Russia are members of the YMCA Europe, which has a complex history.
They are focusing on Youth Led Solutions, which seek peace and justice, build peace through dialogue based on human rights and democracy, and seek solutions to youth issues through young people’s employment and mental health.

Immediately after the invasion, the YMCA of Ukraine began providing accommodation, food, clothing, and hygiene products for those fleeing the bombed areas, and will continue to provide psychosocial support for children and youth. YMCAs in Ukraine’s neighboring countries cooperate with each other to receive displaced people and provide livelihood support 24 hours a day.
There have been demonstrations against the war in Russia, but under the current political system it is difficult to have much power, however YMCAs around the world stand in solidarity with all those who want peace. The YMCA in Japan will immediately call for fundraising activities and support these activities.

In order to prevent human rights and democracy from being threatened in the world and in Asia, we pray for peace even if we are powerless, and hope that we can show our solidarity and action with those who seek peace by raising our voices against war and that there will be no peace by force as our daily desire for peace.

In addition, people in Japan who have close relations with Ukraine and Russia, as well as international students at YMCA, members and their families may be greatly affected. The YMCA will take necessary measures such as providing support to the people concerned, and strive to prevent prejudice and discrimination.

The Tokyo YMCA has a 20-year relationship with the Ukraine YMCA.

On the fifteenth anniversary of the Chernobyl nuclear accident, the Ukrainian YMCA expressed a wish to have an exchange program with Japan as a country that had suffered the same atomic bombings Grass-roots activities such as children’s Christmas card exchange, peace camp visits, and video exchange by high school students have continued.